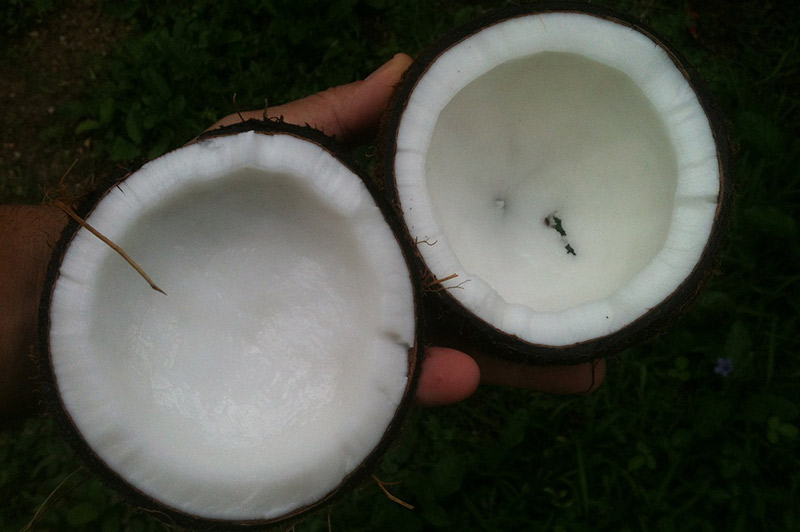 Any hydrogenated oil is less than ideal for our health and causes a rise in LDL (bad) cholesterol.

Coconut oil is one of the oldest food plants on earth that’s known for nourishing the body, increasing strength, and promoting beautiful hair and skin.  Most interestingly, it decreases the fat stores in the body and increases metabolism.

This nutrient-rich oil provides an excellent source of antioxidants and helps us to absorb minerals.  Also, it’s high in health promoting medium-chain fatty acids, over 50% of which comes from lauric acid. In the body, lauric acid becomes antiviral and antibacterial.

Recent studies found that that coconut oil protects against insulin resistance and reduces the risk of type 2 diabetes. It raises HDL (good) cholesterol, lowers the risk of heart disease and boosts thyroid function.

A study at the University of Oxford suggests that the consumption of coconut oil results in positive cognitive benefits observed in dementia and Alzheimer’s patients.

It’s recommended to use an organic, cold-pressed, non-hydrogenated virgin coconut oil to ensure the maximum health benefits.  It has a high smoke point, which is especially useful when cooking at higher temperature or baking as it won’t oxidize and create free radicals that may be harmful to our health.

Simple ways to incorporate coconut oil into your diet:

Coconut oil is one of the healthiest oils to keep stocked in your kitchen. It’s versatile and delicious.  Enjoy!

Lisa Story is a Certified Health Coach with over 20 years in the health education and wellness industry. It's her mission is to help you experience more energy, vitality, and contentment so you can enjoy the most fulfilling life possible.

You deserve a joyful healthy life. I want you to fully experience your vibrant wellness. To feel inspired and motivated. To enjoy a newfound confidence and delight in the simplicity of radiant health. And I'll support you every step of the way.Lisa Story, MA, CHC

Receive inspiration, tips, and delicious recipes from me, in your inbox for free.
Hey, don't worry. You can unsubscribe at anytime.